There are few things in life I love more than making good coffee outdoors on my tiny mobile stove, gazing in awe at mountains or lakes or beaches or cliffs as I boil up my favourite brew.

Wherever I go, coffee comes too. It’s my morning motivator, my lifelong travel companion, my home from home, my eternally familiar friend.

Am I addicted? Probably.

Are there other macchiato maniacs out there who feel the same as me? Other flat white fanatics who would literally carry coffee to the end of the earth?

Yes. And I have proof. 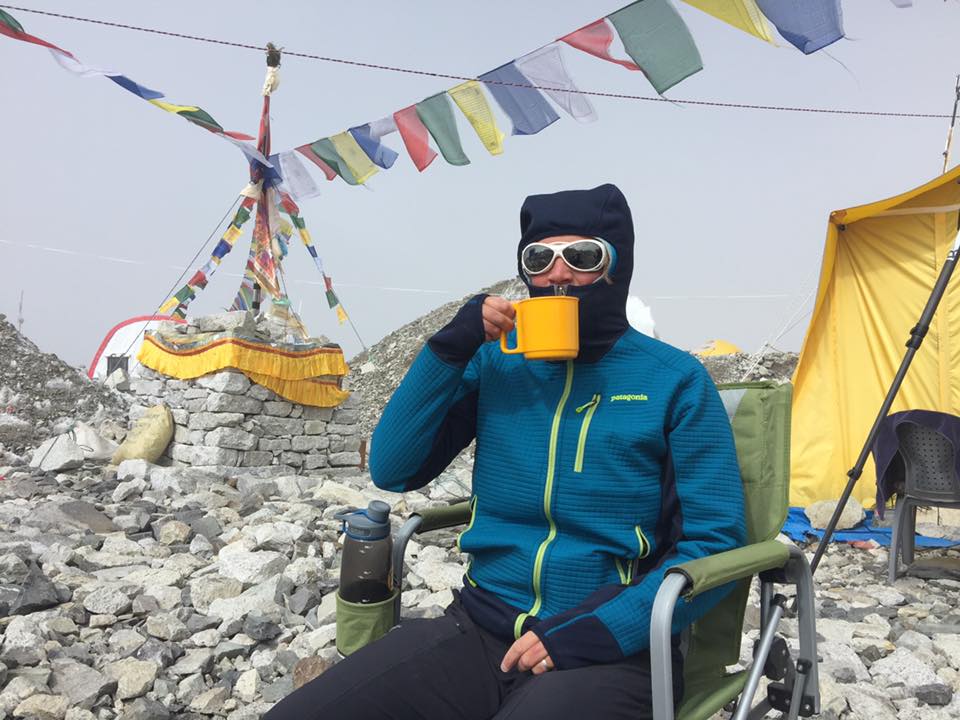 Dr Tash Pirie-Burley is an anaesthetist from Aviemore in the Scottish Highlands. She spent the past few months working with the Himalayan Rescue Association at Everest Base Camp in Nepal alongside two other doctors – Tatiana from New York and Yogesh from Nepal.

The three medics lived alongside sherpas and porters and mountaineers, all of them embracing the challenges of life at the (literally) dizzying altitude of 5,364 metres. For the record, that’s 3,484 metres below the summit.

Life so close to the clouds is far from easy. I trekked in the Everest region last year and I can tell you from experience that it feels very remote, very, very cold and very, very, very high. In addition to that, food and drink is limited – supplies are transported by man or beast or helicopter. Mount Everest isn’t a place for frivolities. Life is simplified, whittled down to basics needs – shelter, food, water, health.

And in the case of Tash, coffee.

Her preferred choice on the mountain is a Himalayan Java dark roast, served in a French press. She admits that at busy times the standards slip to “bog-standard, freeze-dried” granules, but usually the coffee ritual is sacred.

Her base camp buddy Thom – a film-maker from the United States – transported 13kg of his favourite coffee to Nepal during a previous expedition on Everest in 1999. Tash says Thom’s passion for his morning brew hasn’t waned a bit.

“My favourite moment is watching our host take coffee to Thom’s tent at around 6am. The zip opens, Thom’s head pops out and the coffee is delivered.”

The aroma of coffee at high altitude will also stay with Tash thanks to fellow medic, Tatiana.

“I love the smell of Tatiana’s spicy coffee mix – cinnamon, cardomon and cloves – that she prepares in her French press.” 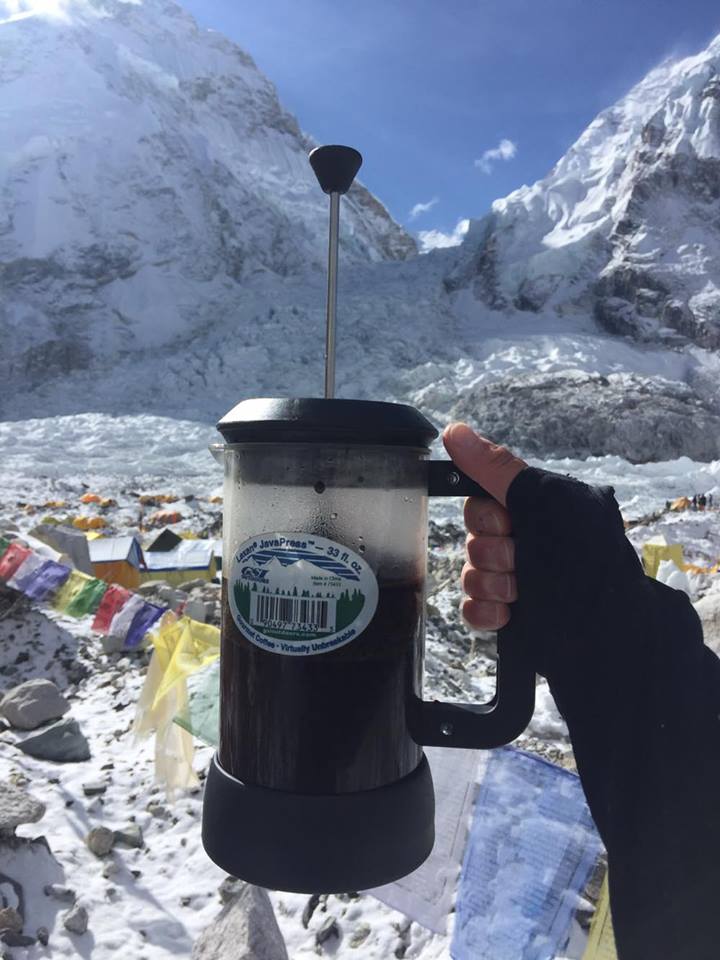 Sounds altogether more appealing than the yak’s milk tea I was offered each morning of my trek. Still, with every step I knew I was only a few days away from a cracking espresso.

No roads lead to Everest base camp. It’s remains alluringly remote, reachable only by those who are willing to walk for around 12 days – a challenge taken on by thousands of people each year. But one thing that surprises (and delights) many trekkers is the presence of espresso machines along the route.

One trendy cafe in Namche Bazar – a market town at 3,440 metres – serves up short, sharp Italian brews. You’ll need to walk uphill for two more days to get your next fix in Dingboche, a small community at an altitude of 4,260 metres.

But that’s the limit, says Tash. “As far up as Dingboche the big barista machines get flown in by helicopter. Most people here have French presses but I think coffee after base camp is pretty rugged.”

Not surprising, really. Anybody heading uphill from base camp has four more camps before the final push for the summit – a route that takes around two months in total to allow for acclimatisation.

I’d imagine coffee is the last thing on climbers’ minds when they attempt to reach the summit.

But back downhill at base camp, Tash admits she occasionally daydreams of mornings at home with her partner, Tess, and their beloved coffee machine. 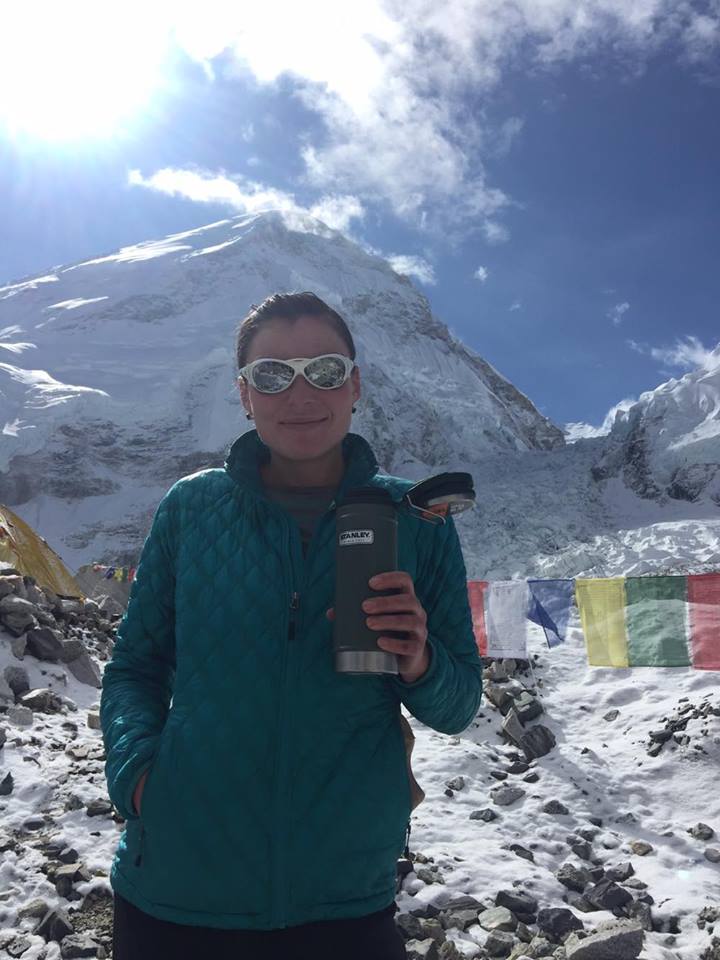 “When we lived in Australia we used an AeroPress and ground our own beans. But now I resort to the Nespresso machine that sits beaming in our kitchen. I’m missing it a lot and I always ask Tess what flavour she’s had in the morning.”

It’s clear to me that Tash is an endlessly enthusiastic person, and that extends to her coffee-drinking habits. But that’s not always been the case. Confession time. Tash used to be a Coffee Hater. 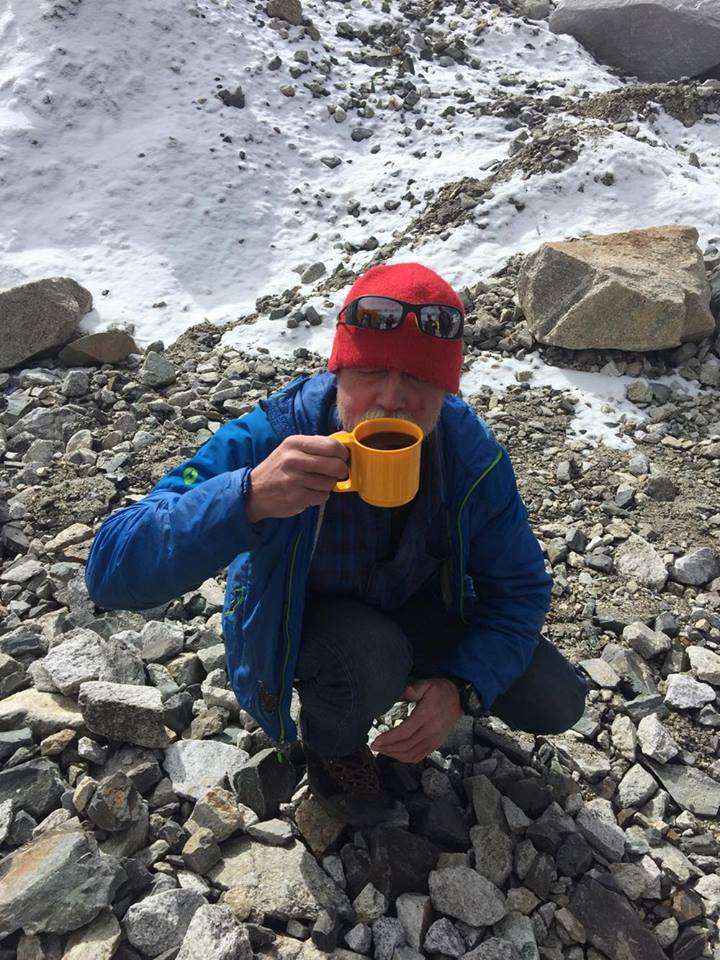 She says: “After trying Greek coffee at the age of 18 my mind was set that coffee was awful. A brief interaction with Spanish coffee in Mallorca softened me slightly at the age of 19. But it was the exceptional New Zealand flat white that turned me into the complete coffee snob I am now. The flat whites lured me in. Not a burnt taste in sight. Kiwis (New Zealanders) really know how to make a good coffee. Even the most remote cafe down there can cater for your needs.”

But nowhere in the world is quite as remote as Mount Everest – so in the meantime a French press does the job. Thermal mug in hand, Tash sits back, sips, savours, smiles as she gazes up at Everest. She’s happy. She’s got her coffee high. This is a brew with a view like no other.