Head to Scotland’s capital city on New Year’s Eve and three things are guaranteed to happen. Firstly, you’ll learn the word Hogmanay – the Scottish name for the last night of the year. Secondly, you’ll find yourself in a crowd of approximately 150,000 other visitors in Edinburgh’s old town. Thirdly, you’ll realise most of the people you talk to and dance with are drinking alcohol – and lots of it.

If you’ve done your homework you’ll also know the speciality coffee scene in Edinburgh and across Scotland is growing at a spectacular rate, with new coffee shops and roasters appearing every month. 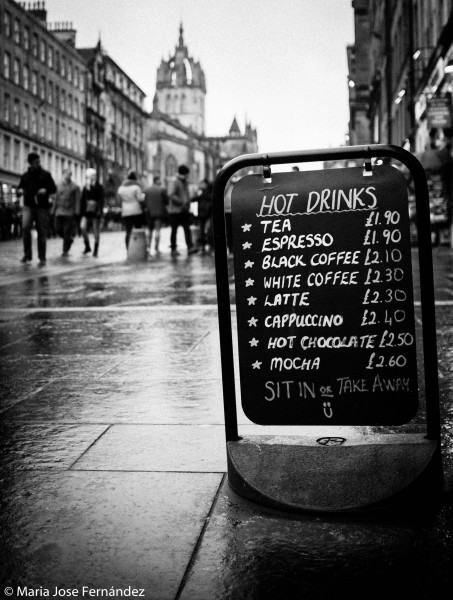 But does the emerging coffee scene have any place at the biggest party of the year? Edinburgh’s world-famous Hogmanay celebrations feature three days of events including a torch-lit procession led by axe-wielding Vikings, elaborate fireworks and an eclectic line-up of live music at the huge street party.

So where does coffee fit in?

At first sight there was very little evidence that speciality coffee played any significant role in this spectacular festival. People braved the bitter wind and cold rain to drink a pint of beer or smoke a cigarette outside pubs and bars – but the terraces outside coffee shops were deserted. A speciality coffee shop on one of the main shopping streets was closed, and a sign on the door announced it would remain so for two weeks. Another small coffee stall overlooking the main party area was shut.

My heart leapt when I saw a long line outside a coffee shop near the Royal Mile. At last, espresso addicts! Dozens of people suffering in the rain just so they could enjoy short, sharp coffee. Right?

Maybe some of them. But the majority were there to follow the footsteps of JK Rowling, who drank coffee there while she wrote the first Harry Potter novel. Disappointed, I continued on my quest

I saw a few crushed coffee cups in bins and on the ground, but nothing in comparison to the vast number of beer cans and bottles discarded by merry revellers. This was reflected in the illuminated menus of the food and drink trucks set up across the city centre – beer and wine and cider and vodka drinks were widely on sale but there was very little evidence of a craving for caffeine.

One notable exception was a small truck positioned in the heart of the street party, advertising cups of freshly-ground Italian coffee. Tiny truck, huge queue. This is it, I thought. I’ve finally found evidence that the culture is changing. Alcohol, be gone! Not quite. An extended observation of this truck revealed 95% of customers were buying freshly-fried doughnuts instead of freshly-ground coffee. 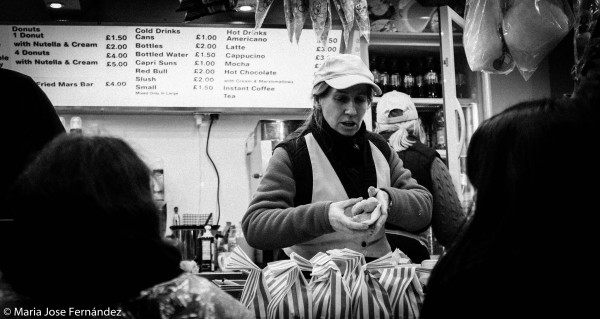 Undeterred, I decided to explore coffee’s presence (or otherwise) in the city’s famous pub scene.

This is a city with more than 700 pubs, and almost 2,000 business hold a licence to sell alcohol. The streets in the city centre are lined with bars selling whisky and beer and wine and cocktails. Why so many? Simple. Drinking alcohol is big part of the Scottish culture and identity, and has been for centuries. Wherever there’s a party, there’s alcohol by the bucketload. And Hogmanay is the biggest party of all.

My first stop was a packed bar in the old town where hundreds of men and a few women were watching a televised football match between the country’s main rival teams, Rangers and Celtic. It was midday, but the only black stuff in sight was Guinness. I moved to a trendy bistro in the new town serving brunch to beautiful people. Surely they wanted coffee with their morning munch?

A few, yes – but many were drinking an alcoholic alternative instead. The espresso martini. In fact, this caffeine-loaded cocktail is taking the city by storm, featuring prominently on drinks menus everywhere, from traditional old man bars to super-slick lounges to student pubs and hipster bistros. 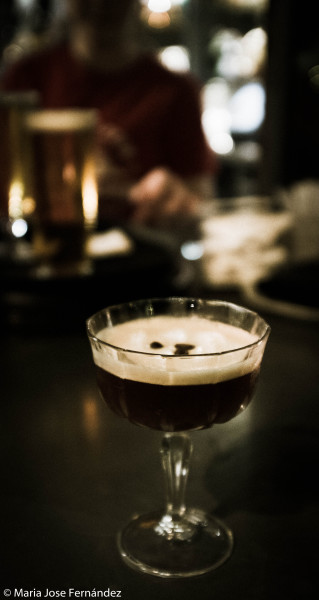 It seems the mighty espresso has finally found its place on the Edinburgh party scene.

This heartened me and disheartened me at the same time. The good news is that many pubs claimed the espresso was made using beans provided by a local roaster. It may not show an appreciation for the subtle aromas of speciality coffee but at least people recognise it’s better than instant granules.

But what about coffee just as coffee? Does it have any place during the celebrations?

I found a few pubs with espresso machines on the counter, alongside beer taps, but it wasn’t until I went to one of the city’s speciality coffee shops that I realised the demand for a quality brew is alive and well.

First of all I spoke to Tom Hyde, co-owner of Brew Lab, a cool coffee shop in Edinburgh’s historic old town. He said the month-long arts festival in August is the busiest time of year for his business but was happy to reveal that sales on Hogmanay were three times the daily average, making it the second busiest time of year.

“We get a rush at the end of the day, customers getting ready for New Year celebrations,” he said. “Some regulars stay away because it is just so busy.”

Sure enough, when I visited Brew Lab at around 4pm on Hogmanay almost every table and sofa was taken. Tom said the most popular drink of the day was the formidable flat white (see The Coffee Universe article Got Coffee, Will Travel for the lowdown on flat whites), but many customers opted for Tom’s winter cocktails – including a Beer-Nog Latte. Coffee and alcohol combined again.

Tom said many clients on Hogmanay were tourists – perhaps no surprise in a city that attracted 150,000 visitors from 80 countries over the New Year period. But are they simply using espresso to recover from the previous night’s alcohol excess? Not in Brew Lab, says Tom. 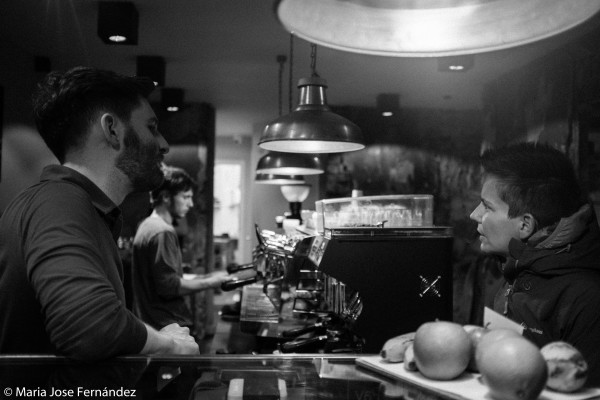 “Because we don’t serve a cooked breakfast we miss a lot of the hangover crowd,” says Tom. “I’d like to think coffee could be part of the celebrations. It’s hard to make coffee well, so people seek us out. We’re a destination business.”

Tom believes that while many Edinburgh restaurants and hotels – and even some pubs – feature ‘real’ coffee on their drinks menu, very few offer the kind of taste-bud-tingling experience found in a speciality coffee shop.

So, let me get this straight – in Edinburgh we’ve got pubs selling coffee cocktails and coffee shops selling beer? Right. But if we want coffee as coffee, we only go to coffee shops? Right again.

So what do experts think of this movement? 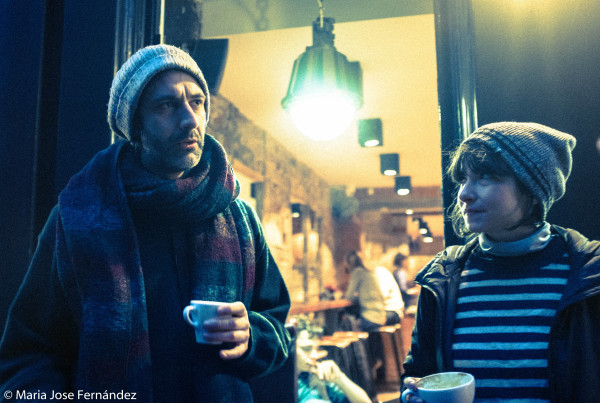 Josh said the phenomenon is increasingly popular across the UK, citing a popular café in Birmingham which has beer and speciality coffee under the same roof. But ultimately the two products inhabit different worlds, he said. “The craft beer culture and speciality coffee are somewhat disparate,” he said. “Coffee culture in the United Kingdom is a daytime thing. It’s still not a culture where you can get a coffee whenever you like. It’s a shame because coffee shops are a great place to hang out.”

Josh believes longer opening hours would bring many benefits, saying this “transition into night” would allow more and more people to meet up in a relaxed and creative atmosphere. “That’s something that really interests me, connecting people,” he says.

But it’s also vital that coffee remains the priority.

“Some baristas maybe started working in hotels . Everyone is trying to make speciality coffee but they’re not all doing it properly.”

Josh researched the Edinburgh coffee scene before travelling north for his first ever Hogmanay in the Scottish capital, and said he was impressed with what he found. But was he planning to switch coffee for alcohol in preparation for the street party of the year? Not a chance. 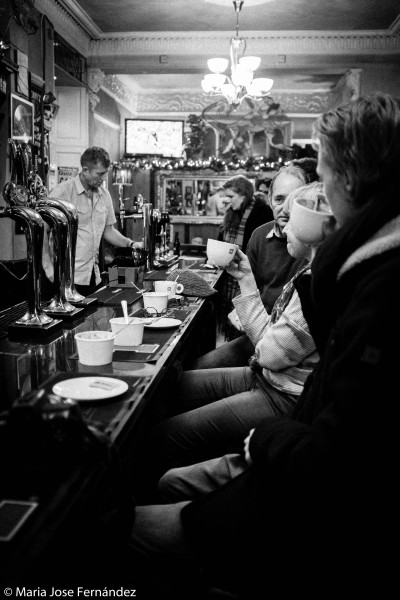 “We’re going to drink as much coffee as we can. We’re going to get really coffee-ed up,” he said. “Then maybe we’ll finish with a beer.”

So as the midnight bells ring and one year fuses with the next, drinkers in Edinburgh do the same with their drinks, blending the old with the new. The espresso is here to stay, in one form or another. So happy new year, speciality coffee, and congratulations – you’re now part of a very Scottish tradition.