I’m writing this article from a campervan in the Scottish Highlands, surrounded by all the clichéd images in tourist brochures. There are craggy mountains, misty skies, pebble beaches strewn with seaweed, a ruined castle on a headland, colourful fishing boats bobbing in the bay.

In the past two days I’ve come across otters, deer, pheasants and eagles roaming the wilderness and have experienced every weather system known to man, sometimes spread out over the course of a full day, but often packed into a 30-minute slot from which I emerge soaked but exhilarated. 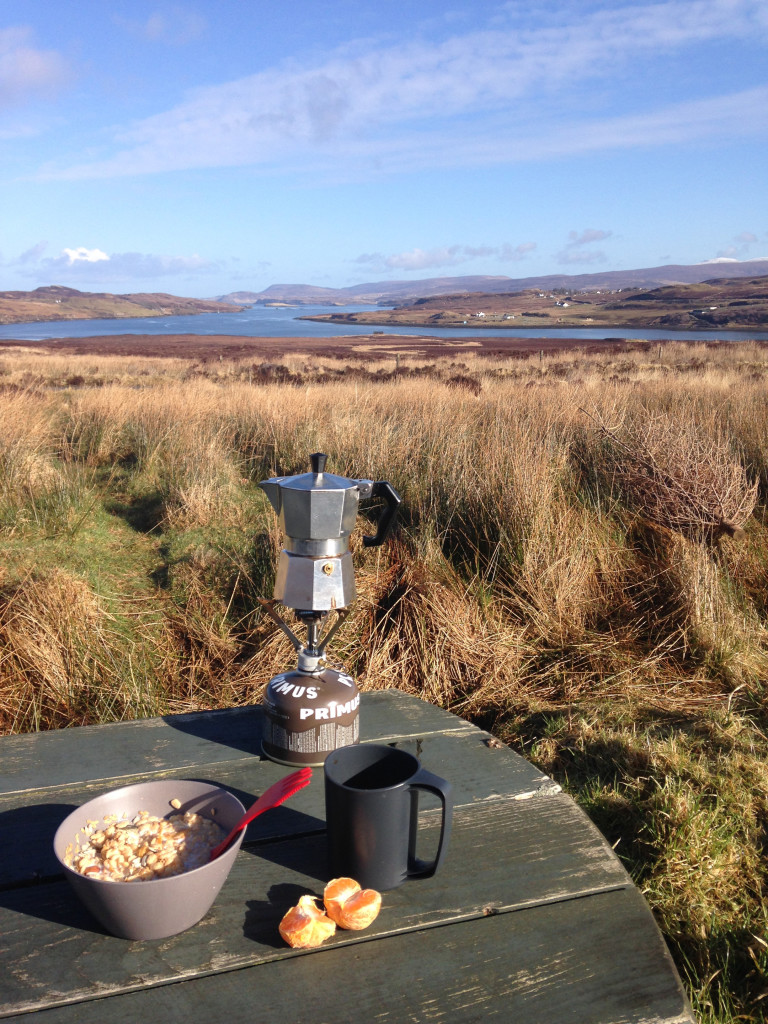 If I continued to live the cliché then I’d end each of my days with a dram or two of single malt whisky from the dozens of distilleries spread far and wide across the country which invented it. Whisky is everywhere in Scotland and many fans of the drink merrily follow the well-pounded ‘Whisky Trail’ to sample the diversity of flavours while enjoying an equally diverse range of landscapes. 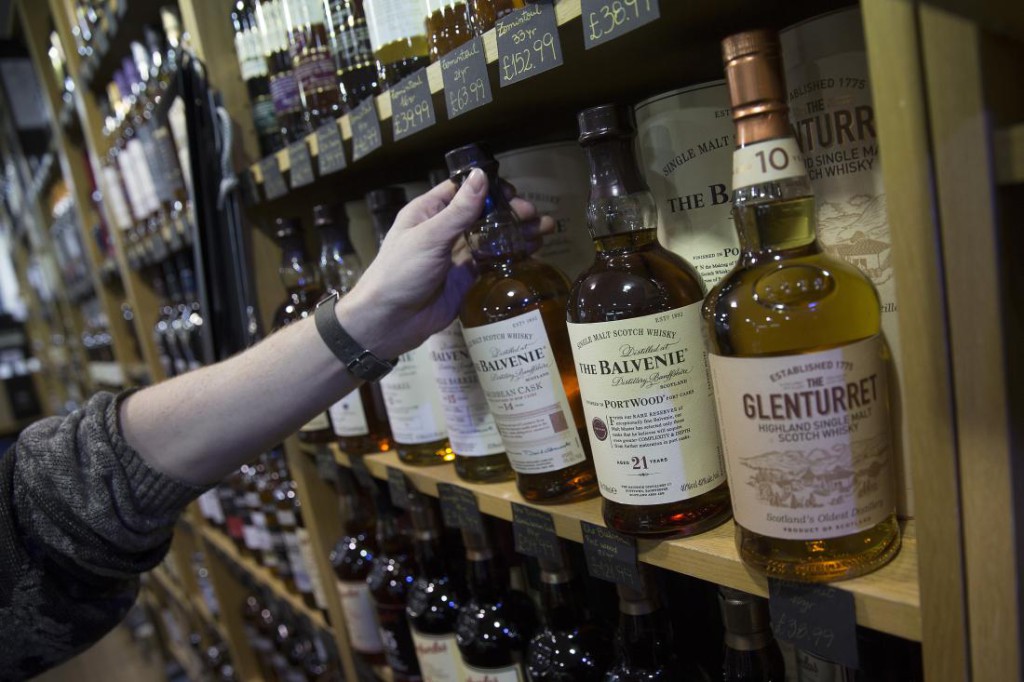 A whisky store in Edinburgh, Scotland. Picture by: Simon Dawson/Bloomberg via Getty Images

But as I drive around the country this week, I’ve noticed a new kind of beast. The Coffee Roaster.

The UK has more than 300 coffee roasters, and more than 20 of those are in Scotland. Many of them are located in breath-taking locations, such as Cafe Sia in Skye, a stunning island off the west coast of Scotland. Cafe owner and manager Tom Eveling says customers now expect good coffee wherever they go – and says local production is important to many people. 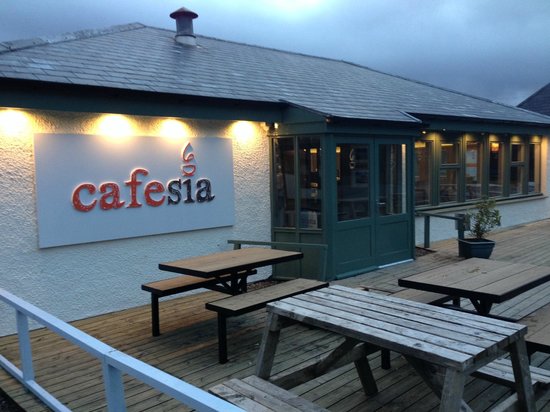 “Coffee is a really burgeoning industry and it’s only going to get bigger and bigger. The UK is catching up with the rest of the world. It’s been going on in other parts of the world for a long time, and we’ve cottoned on to a good thing. Like with everything else we look all around the world and then do it here. There’s been a coffee revolution. There’s a drive towards quality in the hospitality industry and fresh coffee is part of that.” All coffee at Cafe Sia is prepared on the island by Tom’s business partner and master roaster Craig Steele. 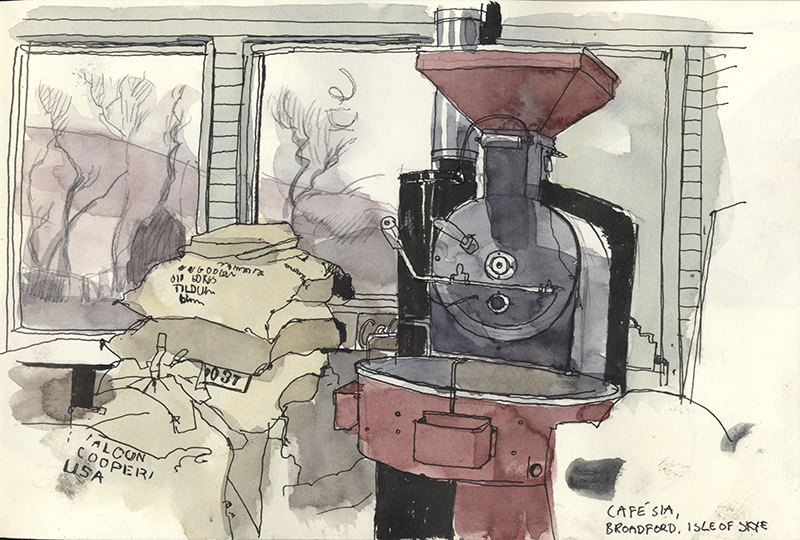 Cafe Sia illustration by Will Freeborn

But in a country where whisky is king, can coffee ever compete?

“Maybe”, says Tom, “It’s a good question. Possibly there could be a coffee roaster trail, but with whisky, each distillery has its own style. Roasteries have different roasts but the coffee itself is not grown in Scotland obviously. Maybe if you went to Central or South America where it’s grown it could be something that would suit them more. But you can sell anything if you market it well. If you make a Scottish Roasters Trail I’m sure some people would follow it.”

In the meantime Tom offers customers an enticing alternative – a combined whisky and coffee tasting session. He explained that African beans are usually paired with lighter whiskies while Colombian coffee is matched with full-bodied malts. “Whisky and coffee go well together. It’s all about giving people an experience that they wouldn’t get at home.” 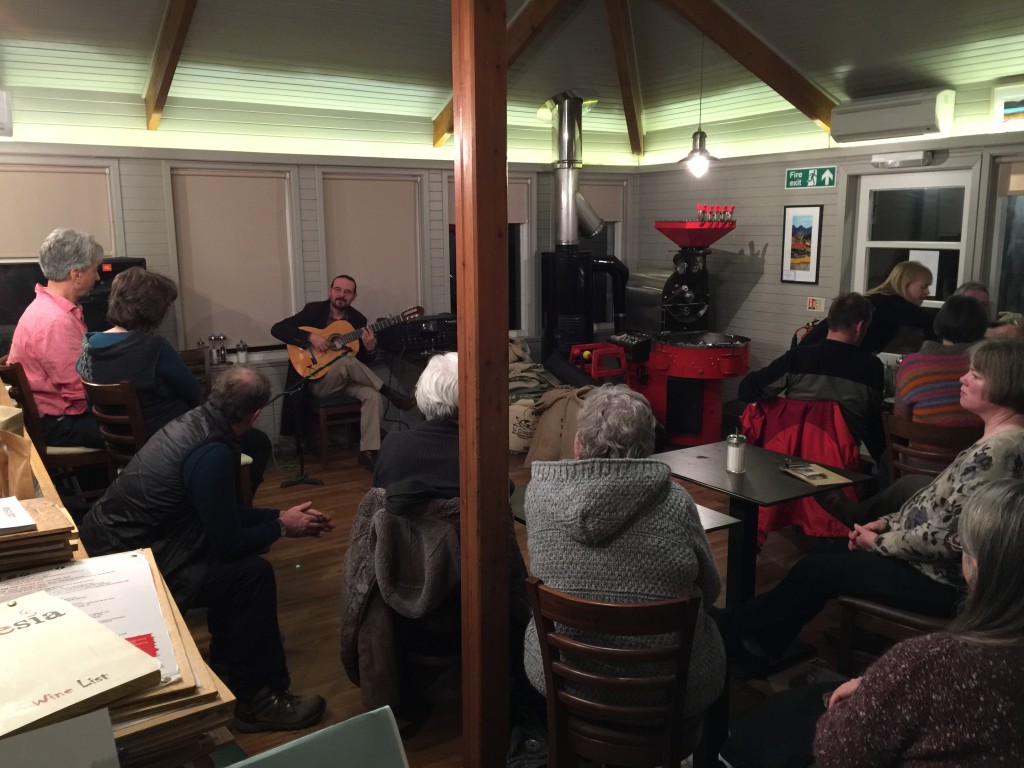 Also combining coffee and whisky is Cairngorm Leaf and Bean, a coffee roaster and shop near the UK’s highest mountain, Ben Nevis. Owners Andy Mallon and Sharon Wooller have teamed up with international whisky experts to host an event at the renowned Spirit of Speyside Whisky Festival.

The Whisky and Coffee Sensory Adventure Class will guide participants through a tasting session which explores the distinct aromas and flavours of the two drinks. Sharon said, “I think it’s a good opportunity to link the two flavours together. For us it’s about educating people about the aromas and tastes and how that can go hand in hand with the whisky industry, which is synonymous with Scotland.” 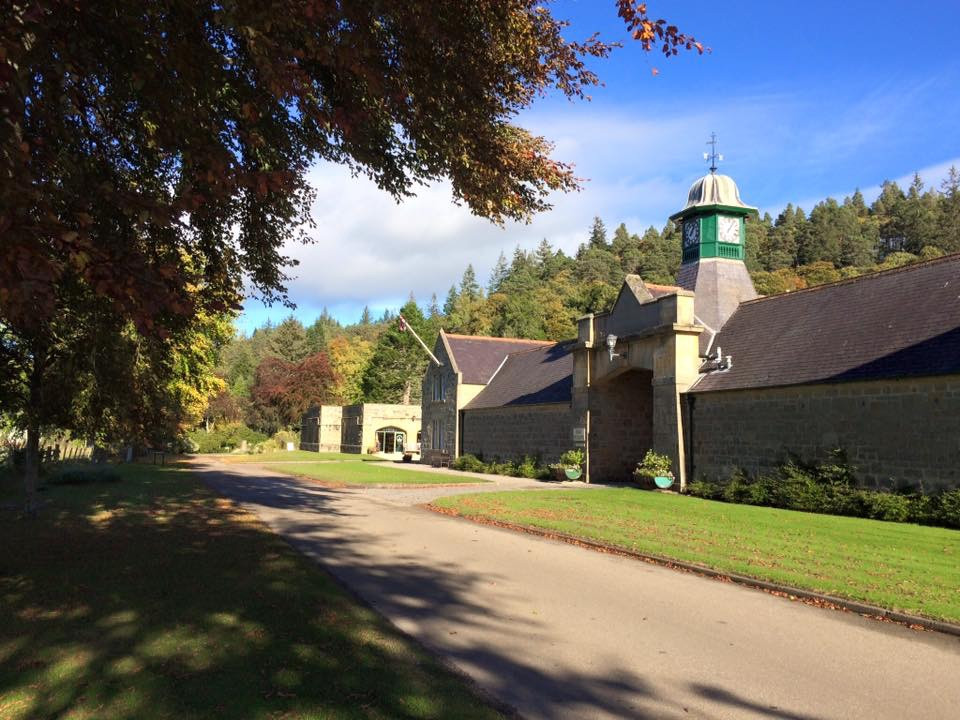 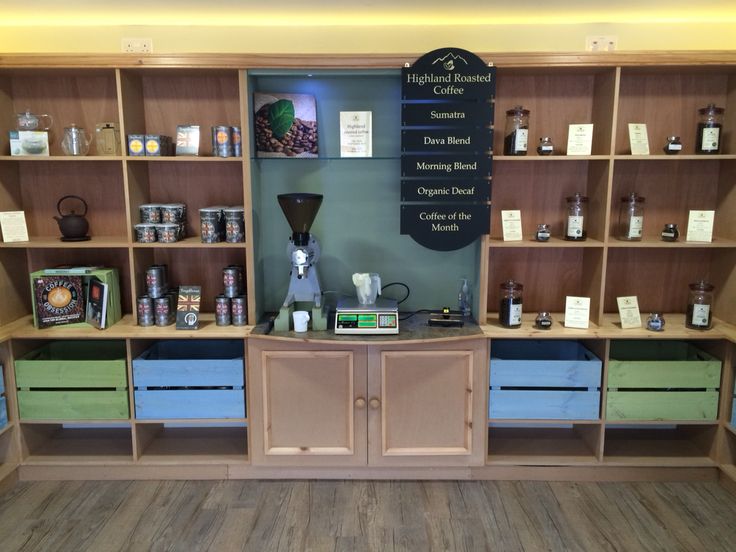 But can coffee alone attract tourists?

Andy doesn’t think so. He believes that speciality coffee is “the buzzword” in Scotland but says it’s unlikely consumers would travel all the way to the Highlands to taste coffee from a specific coffee roaster. “You can get a good cup of coffee in Glasgow or Edinburgh,” he says. “I think the whisky industry is very different. That’s my opinion, but it’s nice to come to an area and know you can get a good coffee to go with it.”

Tourists and coffee fans will find another roaster in Aberfeldy, a small town nestled in rolling hills, close to one of Scotland’s many lochs. It’s an area of winding single-track roads and wonderful hiking routes with more sheep than people – and now, the wonderful aroma of roasting coffee beans.

Glen Lyon Coffee Roasters is run by Jamie Grant and his wife Fiona. The couple met in Bolivia when they were both working as freelance journalists – but have lived and worked in the remote Scottish valley for fifteen years. They set up their business after a road trip in the United States during which they stumbled across numerous micro-breweries and coffee roasters. 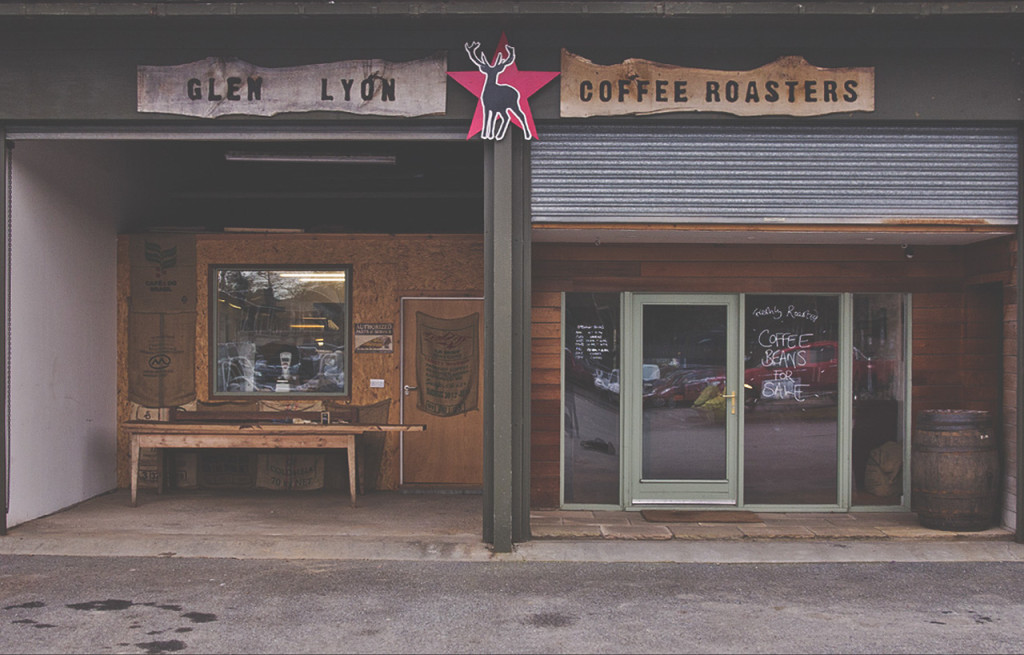 “We started very, very small. For the first two years it was just Fiona in a small bothy next to the house. Fiona is totally passionate about coffee. It’s been her driving passion and that’s got us to where we are.” The couple bought their first roaster from an online auction site. It arrived with instructions in Turkish which they tried but failed to translate using an internet translation programme. “We learned by trial and error. In a way, it was a really good way to learn.”

They started by selling their coffee to delis and markets but have now moved into the wholesale market and provide coffee for cafes across Scotland. All coffee is roasted on demand. 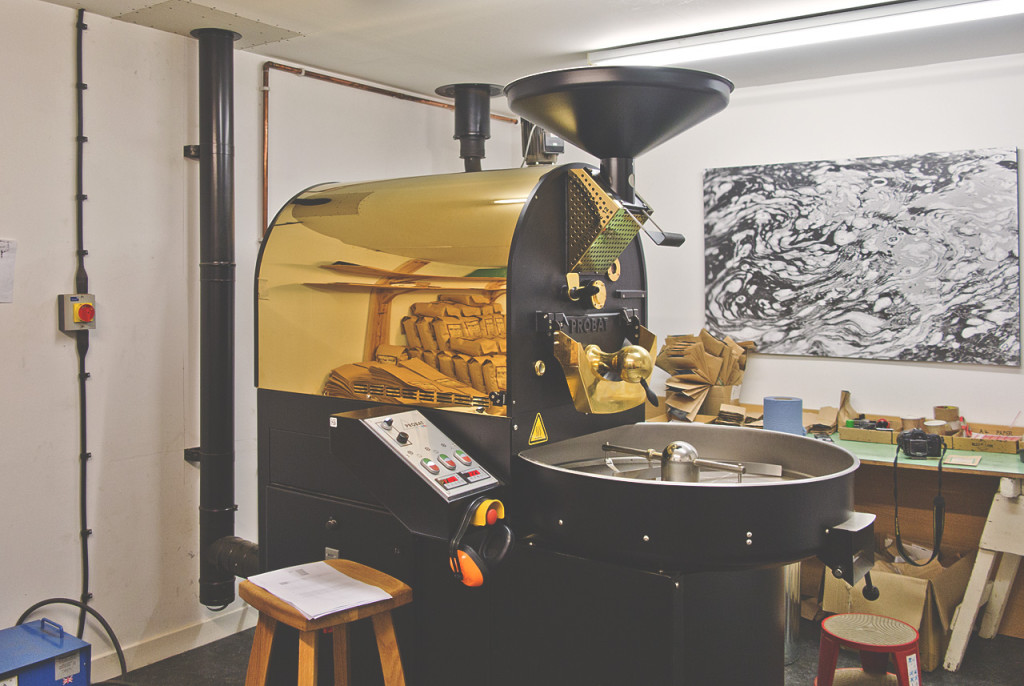 Jamie says the couple had envisaged having more time to travel and immerse themselves in “the international side of coffee” but admitted the reality has been very different as they worked hard to set up and grow the business. But while he dreams of coffee in foreign lands, does he believe travellers coming to Scotland would be drawn towards a coffee trail?

“I think it’s very much a possibility,” says Jamie. “It’s very common in the United States. We’re about five to ten years behind but I think we will catch up quickly. Coffee is very universal and once you’ve tasted a really good speciality coffee it’s very hard to go back.”

The couple don’t operate a cafe but encourage visitors to pop in for a look around and to learn about different aspects of coffee production. They’re also organising a ‘roasters retreat’ in the highlands this month so roasters from across the country can come to share ideas and experiences.

All of this is great news for coffee fans. 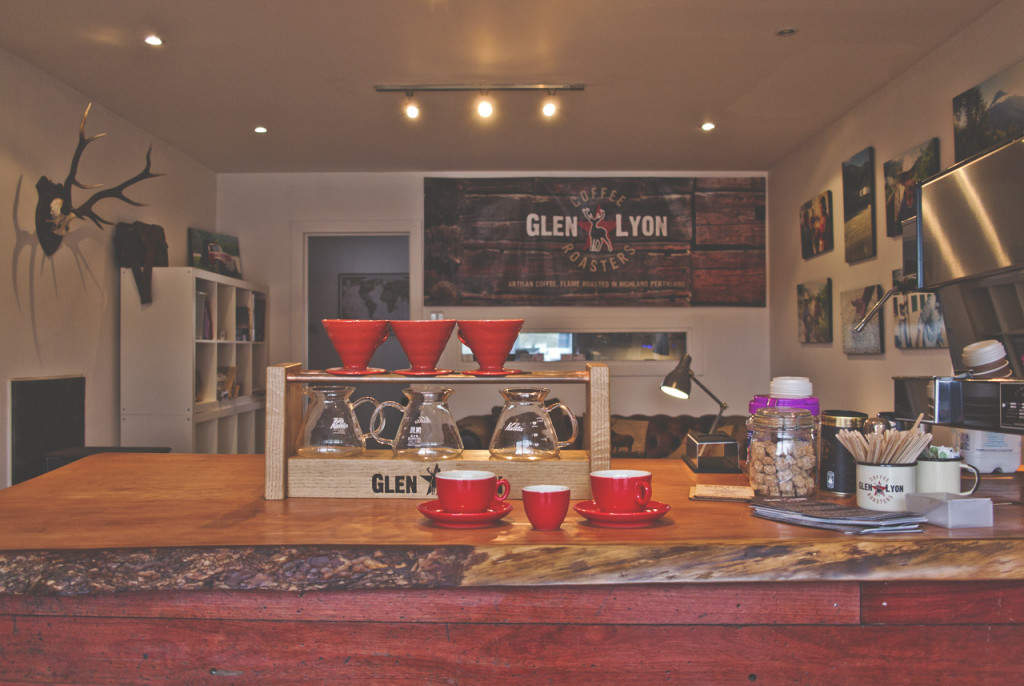 But in this land of castles, mountains and whisky, would the average tourist really be drawn towards the idea of a Scottish coffee trail? The country’s tourism board, Visit Scotland, believes it could be a success.

A spokesman said, “Our current foodie trails have been hugely popular, with more than 70,000 downloads, showing an appetite from visitors to taste and sample all aspects of the country. Scotland has a vibrant, popular coffee culture including world-class coffee roasting brands. A coffee roasters trail would be inspired and we would love to see that happen in the future.”

Me too – but in the meantime I’ll return to my campervan and continue on my own coffee trail.

If you want to join me I’ll be huddled over my little gas stove in the rain, a deserted beach on one side, wild mountains on the other, breathing in cold wind and salty air and the glorious scent of locally-roasted, freshly-ground coffee rising from my moka pot.