It´s official – the Coffee Universe has no frontiers. An Asian barista competing in Europe stole the coffee crown from an Australian, using African coffee beans grown in the Americas. Berg Wu, I salute you. Berg Who? Berg Wu. 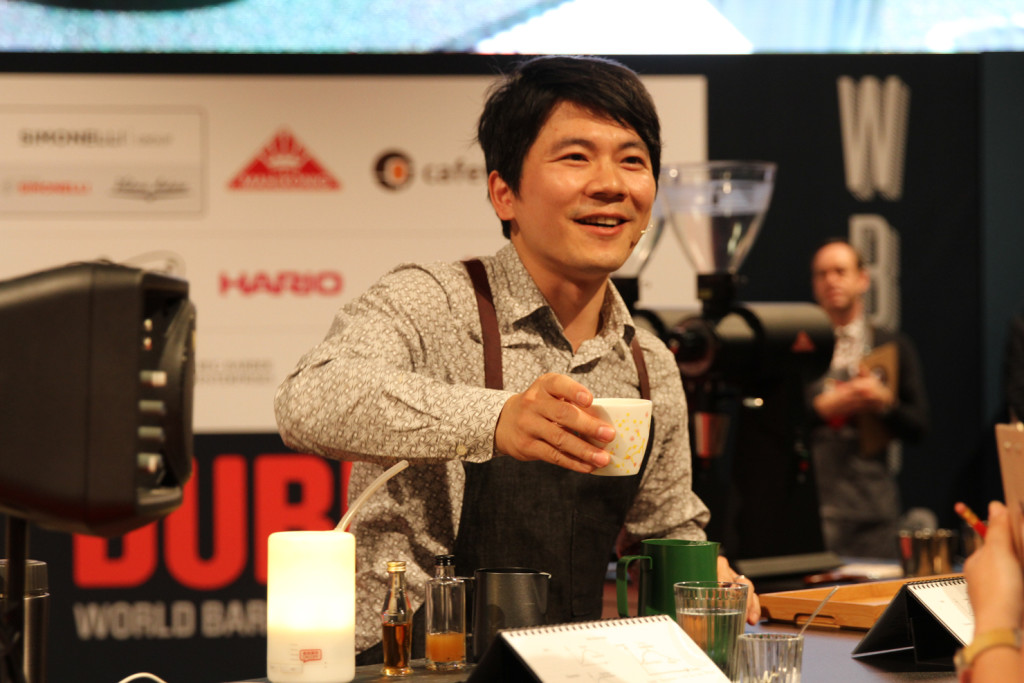 By now most of The Coffee Universe will know who I´m talking about. Berg Wu of Taiwan won this year´s World Barista Championship (WBC), held between June 23-25 in Dublin, Ireland. The annual competition features national barista champions from more than 50 countries. Each participant is required to prepare four espressos, four milk drinks, and four alcohol-free  signature drinks during a fifteen minute performance. Their efforts are then evaluated by a panel of coffee experts who consider not only the taste but also technical skill and creativity. 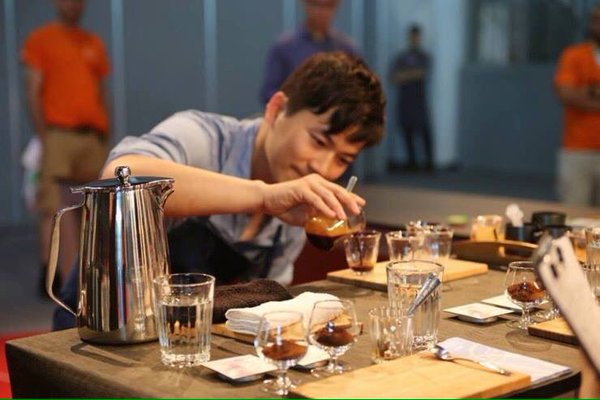 Pic by Wilford Lamastus Berg Wu is the first winner from Taiwan – an island state officially ruled by The People´s Republic of China. It has a centuries-old tea culture but coffee is becoming increasingly popular in Taiwan and all across Asia – a phenomenon explored by The Coffee Universe earlier this year.

In fact, the 2007 WBC in Japan was the first to take place outside Europe or the United States, a move which reflects the growing popularity of coffee in that region. And the championship results speak for themselves. In the past three years the barista crown has gone to Asia twice – to Hidenori Izaki  of Japan in 2014  and now to Berg Wu of Taiwan. 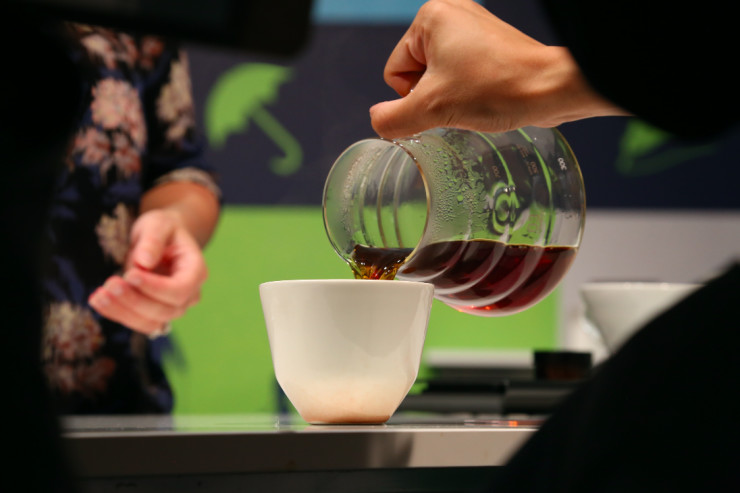 She said all the baristas in the final were excellent but explained why Berg Wu excelled on the day.

“The champion’s coffee was amazing, especially the espresso. The coffee tasted just as he described to the judges – jasmine floral, citrus, and earl grey. It was a cup of coffee that really made me feel like saying WOW!

“In his fifteen-minute presentation, the champion not only served very nice coffee to the judges but also delivered his understanding and knowledge of coffee and every part of the industry.”

She also complimented Berg Wu’s “great customer service” and said his passion for the coffee shone through.

“It was a very engaging and enjoyable performance, she said.

I also spoke to Jim Watson, a coffee professional currently training to be a national and international judge for the Speciality Coffee Association of Europe (SCAE). Jim missed the final day of the WBC but saw champion Berg Wu perform in the earlier stages. “He was a good all-rounder,” said Jim. “And he was very confident.”

Watching the highlights online and reading the details of Berg Wu´s winning creations, that confidence was clear for all to see.

And that´s not all.

It struck me that Berg Wu´s signature drink captures the wonderfully complex diversity of The Coffee Universe. He´s united the continents in a single cup.

Let me break it down. 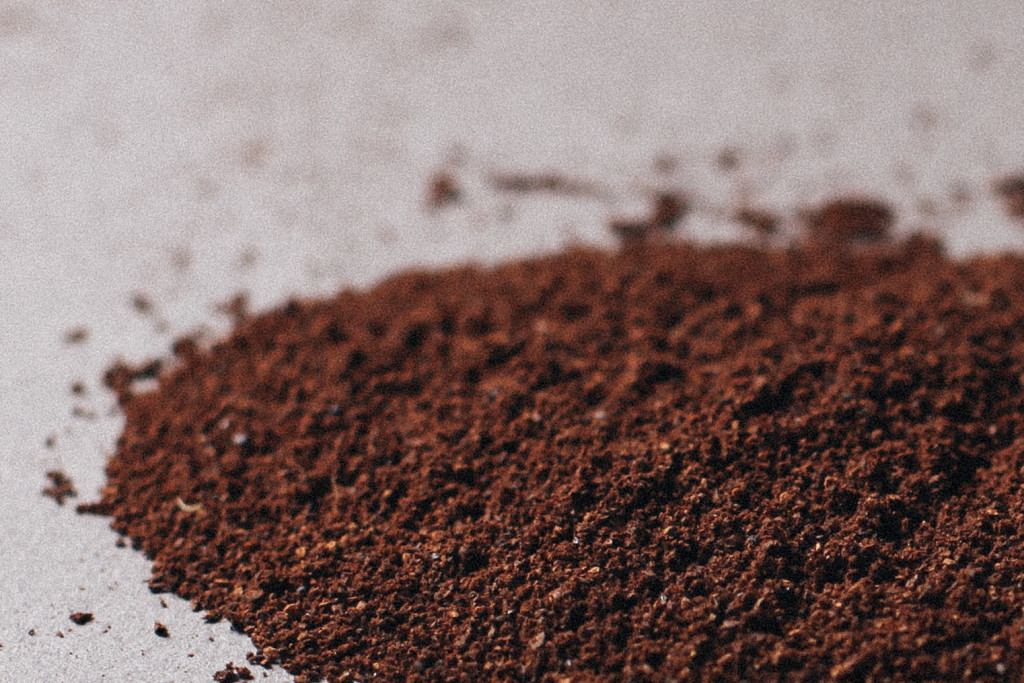 AFRICA: He used Geisha coffee beans, an extremely aromatic variety originating from the town of Gesha in Ethiopia.

THE AMERICAS: Berg Wu sourced his Geisha beans from a coffee farm in Panama, a transcontinental country situated between North and South America.

ASIA: This is Berg Wu’s home. He runs a coffee shop with his wife in Taiwan.

EUROPE: Berg Wu infused his signature drink with Earl Grey, a variety of tea named after a 19th century British Prime Minister, Charles Grey. And for me, the fact that the competition took place in Dublin is relevant too.  It´s impossible to visit the city without encountering image after image of a black drink with a creamy head. But it´s not espresso with crema that we´re talking about. Dublin is the birthplace of Guinness and more than 850 million litres of the iconic black beer are sold every year.  But Berg Wu´s victory let espresso share the limelight for once – it’s a very different kind of black and white drink, but just like Guinness, one that’s loved the world over.

To conclude  – in a world that currently seems determined to break itself into smaller pieces and individual states, one man from Taiwan has united continents. With a single cup of coffee, he’s demonstrated the fact we´re all connected in one way or another. And it’s only when all these distinct elements and influences are brought together that a true winner is produced.

And I salute coffee, a universe without frontiers.