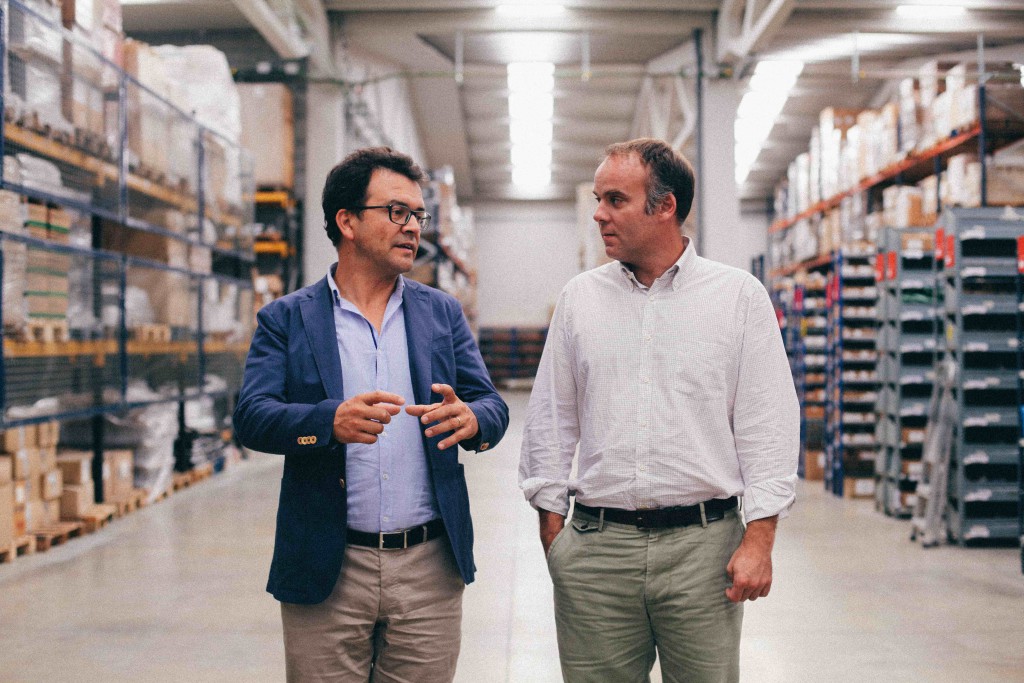 Blai Farré and Rafael Muñoz are both huge fans of espresso machines, of how they’re conceived and built, and the complex, elaborate industrial process that ensures these machines reach their baristas in perfect condition while offering good value for money.

These two are the brains behind Iberital’s R&D operations. Blai is an industrial engineer who has been at Iberital since he started working, and Rafael comes from the world of electronics, transport and telecommunications.

In a conversation at the Iberital factory showroom, surrounded by the machines that started life in Blai’s and Rafael’s heads and evolved to become the intricate machines they are today, we spoke about how innovation has affected coffee and espresso machines.

What are the milestones in the history of the espresso machine?

Rafael: The first milestone was when Luigi Bezzera invented the grouphead. To make an espresso, you need to force hot water through coffee grounds for a certain amount of time, at a certain pressure and temperature.

Bezzera invented a thermal-hydraulic circuit: on the one hand, a large mass of brass (the grouphead), which has a high thermal inertia and maintains its temperature, and, on the other hand, the hydraulic system, which started out as a lever. The hydraulic system that actually makes the machine work didn’t change for a century.

Blai: People didn’t start using electronic until 20 years ago, and the ability to program and automate a series of variables that we choose has revolutionised the espresso machine industry, as well as all the other products capable of including electronics.

So, where are we right now?

Blai: With traditional machines, you can go one of two ways. One is handmade machines, and the other is technology-based machines. Handmade machines are made in smaller batches and use technology only so that baristas can be more accurate and have more control over the settings they choose; they control the machine 100%.

Purely technology-based machines are mainly designed to be ergonomic and easy to use: touch screens, innovative hydraulic systems… the user isn’t so important.

These new technology-based solutions are aiming for consistently high-quality coffee and ease of use for the user, like with capsules and super-automatic machines.

How do you envisage the Third Wave of Coffee? How do you think it will affect the industry and innovation?

Rafael: The companies that export coffee have to be aware of it. It’s already a reality in Northern Europe, Australia, the USA… where we often talk about specialty coffee. The Third Wave is not so closely related to technology; it’s much more about experience, appearance… The internal components are more or less the same, but they’re designed to make both the barista and the consumer fall in love with them.

What I do think is that there is a place for innovation in this area, trying to bring what the barista does closer to the consumer. Taking away the coffee bar, the barista in the middle of the café, leaving the machine open… the consumer can participate and learn. It leads to new styles and layouts…

The Third Wave is already affecting the industry across all brands, and you can notice that in their designs; some brands are bringing back the lever. In our machines, we’re including functions to make the best coffee for each blend because obviously this tendency is making the barista’s coffee-making skills and the consumer’s palate more sophisticated.

We want to offer complete control of each grouphead for each type of blend. For instance, a grouphead with the perfect settings for a Jamaica Blue and another grouphead for a single-estate coffee from Colombia.

What do you think will happen with this wave? Is it a just a passing phase, or is it here to stay?

Blai: I think it depends on the culture. If there’s no coffee culture, it’s much more likely to have an effect; it’s new and exciting. Traditional coffee-drinking countries, both espresso and filter coffee, perceive the Third Wave differently; it’s less likely to have an effect because we’re used to a certain kind of coffee. Only the most innovative consumers will want to try something new.

In certain countries it’ll last, in others it’ll be a trend, and in others it won’t take a strong enough hold to become anything more than a niche. If coffee is part of the mass culture and people are consuming coffee all the time, their palate is probably not very well trained, although really this trend is a good chance for people to train their palate.

Rafael: I would say that it’s here to stay, but we’ll have to wait and see for how long. There’s a tendency to drink more coffee than tea. In fact, in England, people are buying fewer teapots and are starting to buy more coffee makers. In some countries, we can already see how coffee is growing and is taking on new forms, like mixtures with syrups, coffee cocktails and even alternative methods like chill filtering, which takes hours to make a coffee. 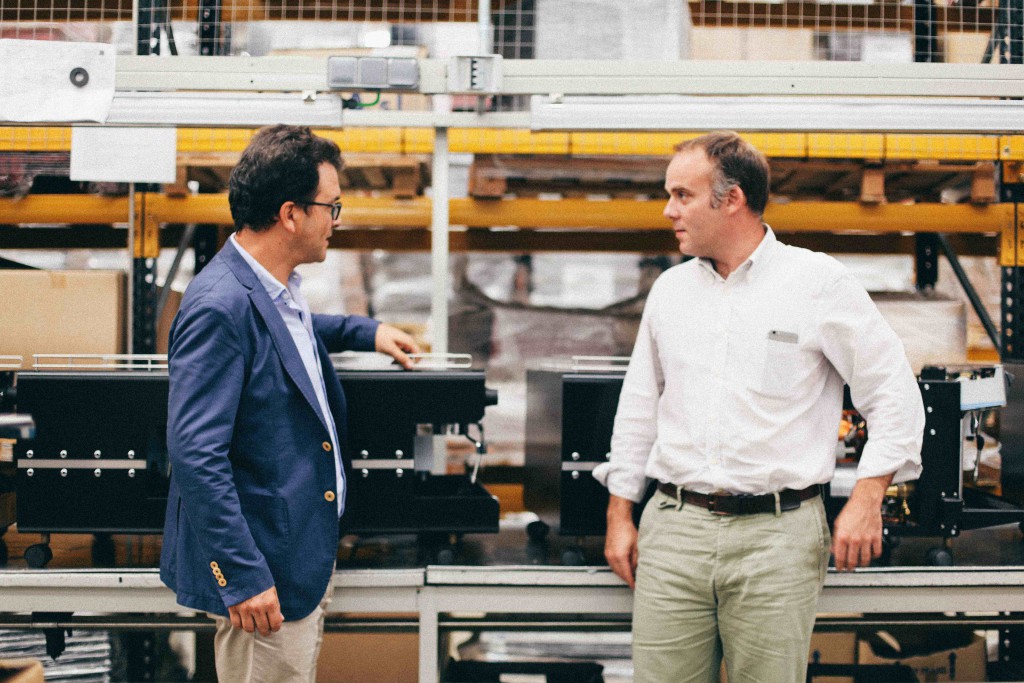 What is Iberital’s view on innovation in espresso machines?

Rafael: The first time we made an espresso machine, we were coming from a background in repairing pumps, which is where we got our heritage of maintenance and upkeep and an everyday relationship with the barista: ease of handling and use, making tough, durable espresso machines that last, those are our roots. It’s not enough, but we’ve always believed in simplicity so that our machines are easy to manufacture and service. That’s what we call intelligent design: making the barista’s life easier.

Blai: Every time we come up with a new machine, we always rethink the appearance as well as the composition and design of each internal part of the machine. We think about customisation, ergonomics and versatility: giving professional baristas control and making things simple for trainee baristas.

Rafael: It’s like with cameras. We’ve got an autofocus, but we’ve also got the option of doing things manually so that the user can choose what’s best. We want to give baristas the ability to take decisions and to be in control of the water flow so that they can choose settings based on their knowledge and experience.

There are also other issues that people tend not to talk about much but that Iberital takes really seriously, as you’ll see with our next few innovations, and that’s the energy efficiency of espresso machines because that’s one of the biggest monthly overheads for any café.

In terms of the way we come up with ideas and create, in the last few years, we’ve added two processes that help us to be agile and effective. The first one is Rapid Prototyping, instant prototypes, 3D printers… The other one is Design Thinking; we form multi-disciplinary teams with designers, engineers, consumers… and we think about how to innovate in the three main areas of the espresso machine: the hydraulic circuit, the electronics, where ultimately what you’re looking for is connectivity, and the aesthetic design, shapes, layouts, materials…

And finally… How do you envisage the espresso machine in 20 years?

Blai: I would say that it will have even more electronics in a few years, it will be more reliable and versatile, although in the short term, I don’t think the layout will change.

Rafael: Perhaps in the future, espresso machines won’t need a barista, like the cars they’re coming up with at the moment, but I’m quite sure they’ll start using new materials. For example, I’m thinking, although maybe I’m sticking my neck out slightly, about graphene being used for both the bodywork and the internal elements.

Blai: Using these new materials means that machines will be more efficient, shorter waiting times, the water will heat up more quickly…

Rafael: I imagine you’ll be able to customise every part of the bodywork on your machine, using a 3D printer, based on smaller, more customised batches. Imagine you’re a barista in Australia. You order a machine from me. We then send a file with our design to a nearby hub, and the machine is ‘printed’, a process that’s already being studied and used called Additive Manufacturing. 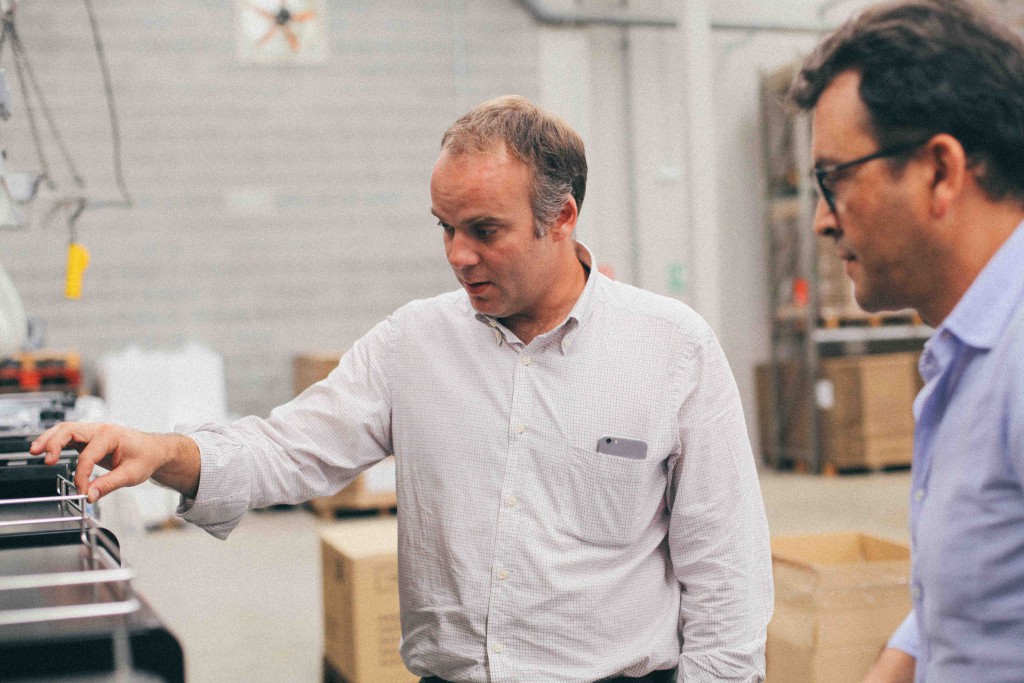 Pictures by Iris Humm at Iberital’s factory in Barcelona