What does coffee have in common with Art Nouveau? And what’s the connection between Art Nouveau and the capital city of Latvia, one of the three Baltic States?

The ‘new art’ movement, inspired by the curved lines of nature, flourished in towns and cities across the world between 1890 and 1910. It’s chiefly associated with architecture but applies to all decorative arts including furniture, jewellery, textiles and lighting. Famous examples include Antoni Gaudi’s Sagrada Familia in Barcelona and the ornate entrances to the metro in Paris, by Hector Guimard.

But which city in the world has the highest concentration of Art Nouveau buildings? The prize goes to Riga, capital of Latvia, in north-east Europe.

So how did that happen?

Well, the city experienced a major economic boom at the end of the 19th century, becoming the largest port in the Russian Empire, and one of its largest cities. The new rich invested their profits in apartment blocks built in the emerging Art Nouveau style – and today almost a third of all city centre buildings are examples from that period. 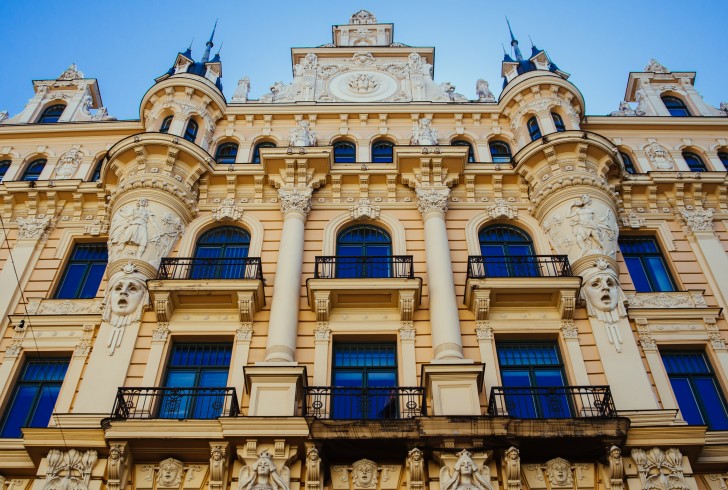 But the glory days of Riga are far from over.

Passionate and highly-trained entrepreneurs are bringing another ‘new art’ to the city and The Coffee Universe has been lucky enough to speak with one of its pioneers.

I introduce you to Ancis Romanovskis, mastermind of Rocket Bean Roastery.

The business – a roastery and coffee shop – was launched in March 2015 in a renovated sock factory. It’s one of only two roasters in Riga, a city with almost 700,000 inhabitants. There’s no doubt that the speciality coffee culture is still emerging in Latvia, but Ancis says it has changed a lot since his childhood. 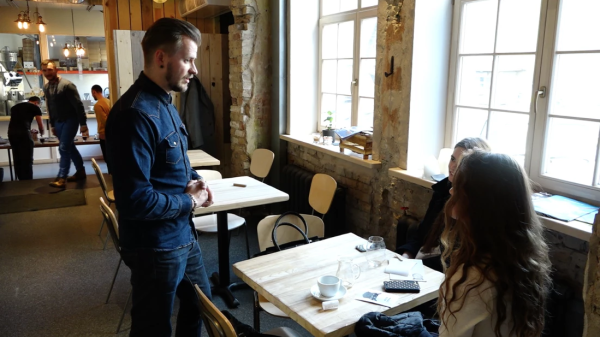 “Pure Arabica beans were rarely available in Soviet Latvia at that time,” he says. Growing up, I remember only instant coffee in my grandma’s kitchen and in my college years we had no coffee shops. Coffee was available in canteens and restaurants, but never as a stand-alone coffee shop. When I started work, my daily office coffee was made in the cup.”

And what about today? Sometimes the situation isn’t much better, says Ancis.

“Today when people go out for dinner they still face poor quality coffee in the majority of restaurants. I’ve had situations where I was visiting restaurants and, when we wanted to order coffee, the waiter suggested we go for tea as he felt ashamed by the coffee quality they have. Often it is combined with poor quality equipment which is technically old.”

But don’t despair – as demand for quality coffee increases, so too does demand for the latest technology, provided by companies such as King Coffee Service. The Riga-based company supplies quality coffee equipment and training across all three Baltic states, working in cooperation with leading brands in the international market such as Barcelona-based Iberital.

Ancis says this kind of investment is a clear sign that coffee is no longer “forgotten and underestimated” in the Latvian hospitality industry. There is hope, he says.

“I have the pleasure of working with clients who look on the business from a different perspective,” he says. He explains that while old-style managers would make cuts to save cash, the new generation is prepared to improve quality, knowing that in the long term they will profit. He says, “We have a reasonable amount of quality places with owners who are interested in delivering quality products to the clients with quality coffee, great equipment and trained baristas. But as one of the trend builders, there is a lot of work to do, to educate our consumers and clients about quality coffee and the best ways to enjoy it, not only in a café or restaurant, but at home.”

Ancis says part of the problem is that, historically, the people of Latvia are not major coffee drinkers.

“It is a very popular drink but if we look at the global ranking of coffee consumption by capita: Latvia is in 37nd place with 3.2kg annually per capita, Lithuania in slightly better 27th place with 4.1kg and the leader here in Baltics is Estonia, which takes 23rd place with 4.5kg per capita annually.”

He says consumption in Latvia is rising as the quality of coffee improves but admits there’s still a long way to go. It’s a matter of supply and demand, he says. “Elderly people have grown up drinking poor quality coffee and instant coffee holds a strong position, especially if we start to look out of the capital city. This situation is the same worldwide,” he says. “However there is good news too. The situation is changing. I believe we’ll see much more speciality coffees on the shelves of grocery stores.” 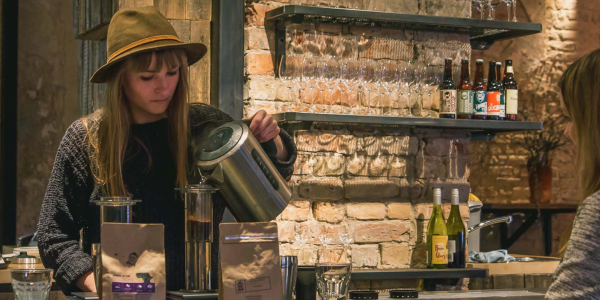 So how do locals react when they drink speciality coffee for the first time?

“It’s a shock usually! They don’t expected coffee to taste like that.” Ancis enjoys offering coffee to people who don’t usually drink it, especially “sweet, fruity” pour-over coffees. “I’ve done my personal research on how many coffee haters or people who don’t usually drink coffee will accept the taste of ours. So far my ranking is around 99.9%. They say our coffee tastes different.

“It’s always the taste! So different! So diverse! But it is very simple – when you try something better, at first it may be difficult to understand it, but with a few tries you can sense the difference and suddenly you notice that your old coffee tasted very bitter, earthy and sometimes even rubbery.”

So, apart from coffee haters, who else visits the Rocket Bean Roastery?

Ancis says: “We are for everyone. I’m not saying that this is our vision – it’s a reality. We have a wide range of people visiting us, starting, of course, with tourists and ending with locals, politicians, lawyers, designers, creative people, musicians, artists, actors, sport celebrities, business people, workers, and elderly ladies coming to enjoy a cup of coffee and dessert before visiting a theatre which very near to us. 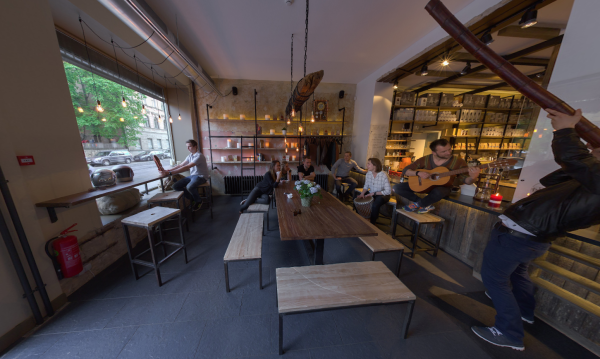 “The range of people is very wide. We are very open-minded, so maybe we are a match for everyone. We also have food lovers, thanks to our celebrity chef, Artūrs Taškāns, who is well known in Latvia and used to work in few Michelin restaurants worldwide. We didn’t want to have a regular chef. We surprise our guests with outstanding coffees, so we can’t offer them anything less with food.”

The staff is wide-ranging too, with twenty five people working at the café, including six baristas. Given the long opening hours, it is understandable that Ancis has such a big team – they serve coffee, cakes, lunch and dinner from 8am to 11pm most days. 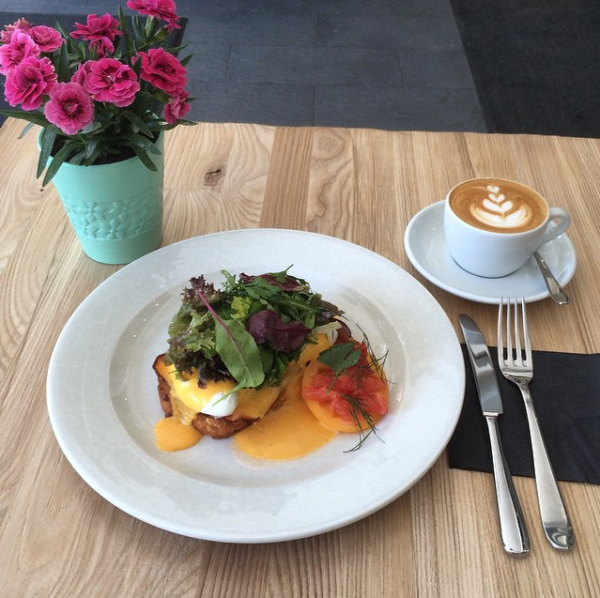 But are customers really ordering espresso at 11pm?

Ancis says most people “change coffee to another fuel” after dark. “In the evening we operate more as a restaurant, so we offer Latvian and imported craft bears, a selection of unusual wines and some spirits which we make, with love, into tasty cocktails.”

So how do staff maintain their energy levels for such a busy and varied schedule?

“We don’t sleep,” jokes Ancis. “It is so exciting, so we are afraid to miss out on something. That’s why we keep drinking coffee! However hard work always pays back and now we are gaining recognition in Europe and outside its borders.”

And how many espressos does Ancis drink on an average day? Not many, he says – but confesses he’s found many alternative ways to enjoy the black brew.

“I used to drink loads of espressos during the day but now my morning starts with pour-over coffee at home and my next coffee would be some cappuccino at the roaster. The rest of the day I’ll have some pour over coffees then after lunch I still enjoy some nice shots of espresso.”

It’s no wonder he doesn’t sleep.

But for me his enthusiasm encapsulates the spirit of the speciality coffee movement – and if coffee is the new art of Riga, it seems to me that Ancis is one of the masters.