Imagine working all day in a room that measured four metres by two. Add the fact that there’s no place to sit down and that you’re knocking elbows with a colleague for eight to twelve hours day. Sound like a tough gig?

Okay – let’s add a few sensory elements: the lingering aroma of freshly-ground coffee, the heat and hiss of the espresso machine, the gurgle of warming milk and the ‘task’ of carrying out espresso taste-tests several times every day. Think you could hack it? Then grab an apron, roll up your sleeves and step inside.

It’s time to wake up and smell the scent of life inside a coffee truck. 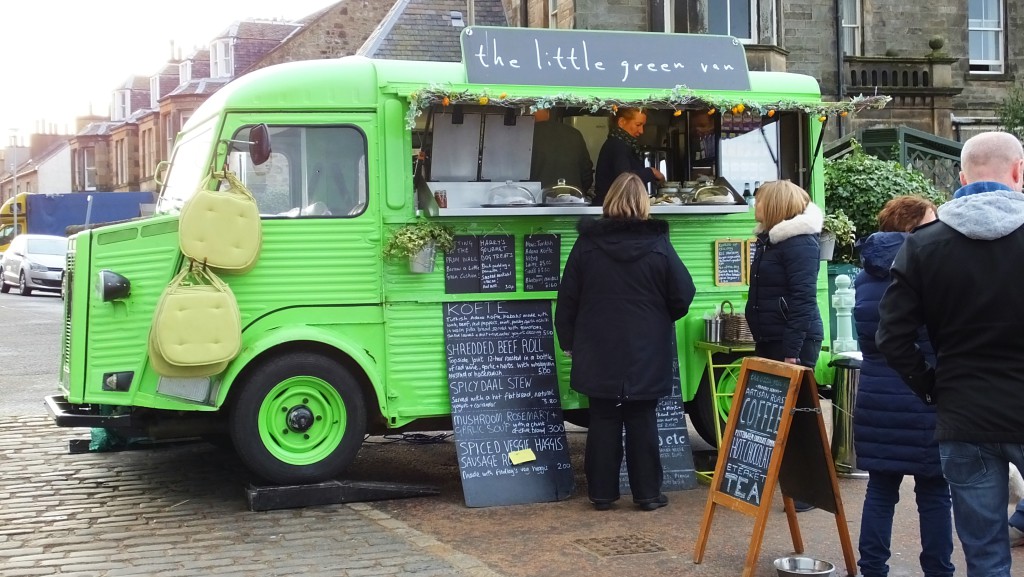 Scottish entrepreneurs Terry Watson and Kirstin Norrie opened a coffee truck two years ago in Portobello, a pretty seaside town near Edinburgh. The idea for the business – called The Little Green Van – was inspired by walks along the beach promenade with their children.

Kirstin explained: “It occurred to us that the promenade was such a good place – and that there could be a lot more there. We walk along the promenade a lot and fancied a good takeaway coffee, so thought we’d do it ourselves.”

First move, buy a van. Second move, transform the “empty corrugated shell” from 1980 into a coffee truck. Third move, embark on an unforgettable road trip from a specialist van workshop in England to their Edinburgh home. Kirstin laughs at the memory, revealing they travelled just 300km in eleven hours – thanks to the van’s maximum speed of less than 50km per hour.

But they made it, and suddenly, they were ready to go. The Little Green Van lifted its hatch to the public around a year after the idea was born. Kirstin says the opening day was filled with “excitement and apprehension” but two years on, business is booming.

Their regular customers – families and dog-walkers and runners and tourists – rave about the coffee and the van and the cakes and the little green cushions on the sea wall that overlook the glorious simplicity of sand and sky and sea.

But the Scottish seaside brings challenges too. Kirstin explained that the frequent changes in weather and air pressure can impact the flavour of their coffee, meaning regular flavour monitoring is essential. “We have to test that the espresso shot still tastes as it should.”

And they should know. Both Kirstin and Terry completed various barista training courses with Edinburgh business Artisan Roast, a local coffee roaster which also operates cafes in the Scottish capital.

“When we set up the business the idea was to do something different and make some money while doing something we liked. But we’ve made a lot of friends and that was something we hadn’t thought about. It’s a really nice part of the whole thing.”

Great coffee, good friends and beautiful views. Sounds idyllic, right? More or less, says Kirstin. But she admits working in such a small space can be challenging at times. 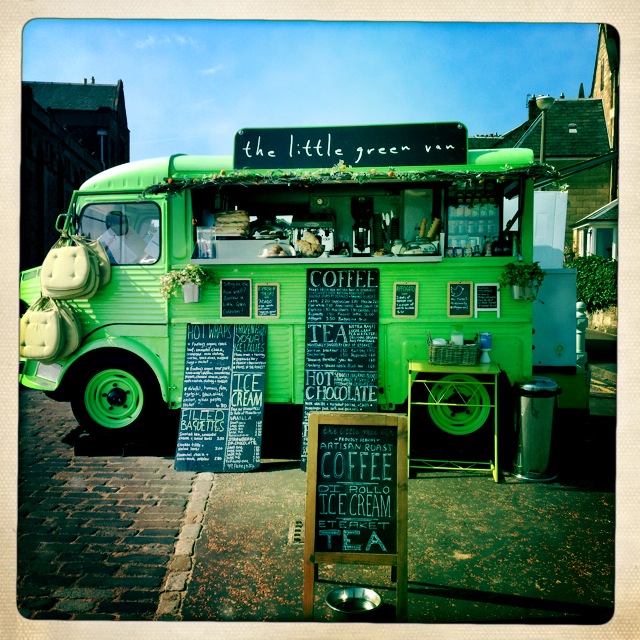 “It’s a very small space and it’s quite quirky. I think you couldn’t be in something so small with somebody you didn’t know well. We have our moments  – but on the whole it is fine.”

And despite working in a world of caffeine, Kirstin admits it can be tiring work – especially during the summer when the van attracts a “relentless” stream of customers. “It’s a good complaint,” she says. “But a small break of even 10 minutes would be blissful.”

For the record, Kirstin’s flat whites are blissful too.

But she’s not alone in producing big flavours in tiny spaces. The world is entering a new phase, some kind of food truck renaissance. Gone are the days when greasy hamburgers and soggy fries and bitter instant coffee were the only things on the menu. Food trucks across the planet are now zooming towards the other end of the spectrum, offering food and drink that’s fresh and healthy and locally-sourced. 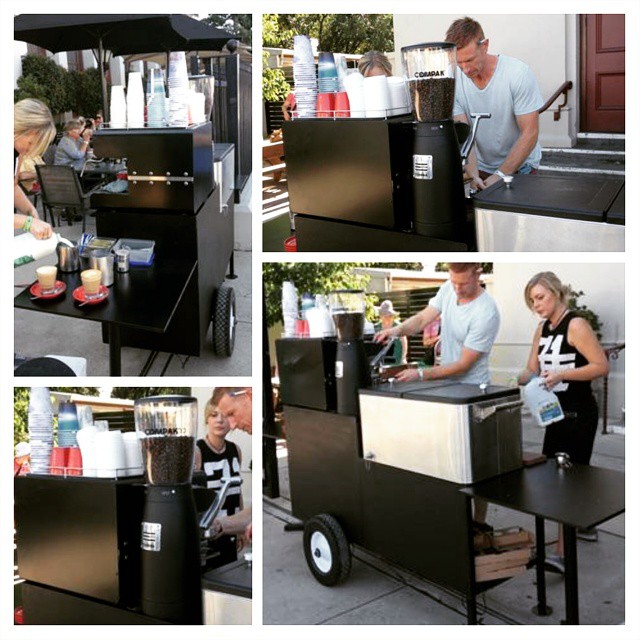 Coffee lovers in Toronto, Canada, have half a dozen speciality coffee trucks to choose from in the city’s popular ‘food truck alley’ and new businesses are popping up regularly. Travel across the globe to Australia and New Zealand and you’ll be spoiled for choice.

But it’s not only baristas who are reaping the benefits of the boom. Rising alongside the coffee entrepreneurs are businesses whose sole purpose is providing the coffee vans.

In Australia mycoffeevan.com.au will design and construct your dream coffee truck – with prices starting from 33,000 euro. In the United Kingdom a company called Really Awesome Coffee offers van conversions for around 10,000 euro. It also operates a nationwide coffee truck franchise, offering equipment and training to entrepreneurs as part of the deal.

And for those who’d rather go it alone, there’s plenty of free guidance online. I did a quick search for ‘how to build a coffee truck’ and was astounded to be offered almost 16,000 results. Geography is no excuse. Even if you’ re on a tiny island in the middle of a big sea, you can create a coffee truck if that’s what you really want to do.

And that’s exactly what happened in Funchal, the pretty capital city of Madeira, a volcanic island in the Atlantic. The Portuguese island – a steep-sided rocky mass off the coast of Africa – measures 801km squared and is 860km from Lisbon.

But it has a coffee truck –  thanks to local barista and entrepreneur, Ricardo António Telo Freitas Maia. He opened his business last year and works between 8 to 14 hours every day to maintain his customers’ demand for artisan coffee on the go. 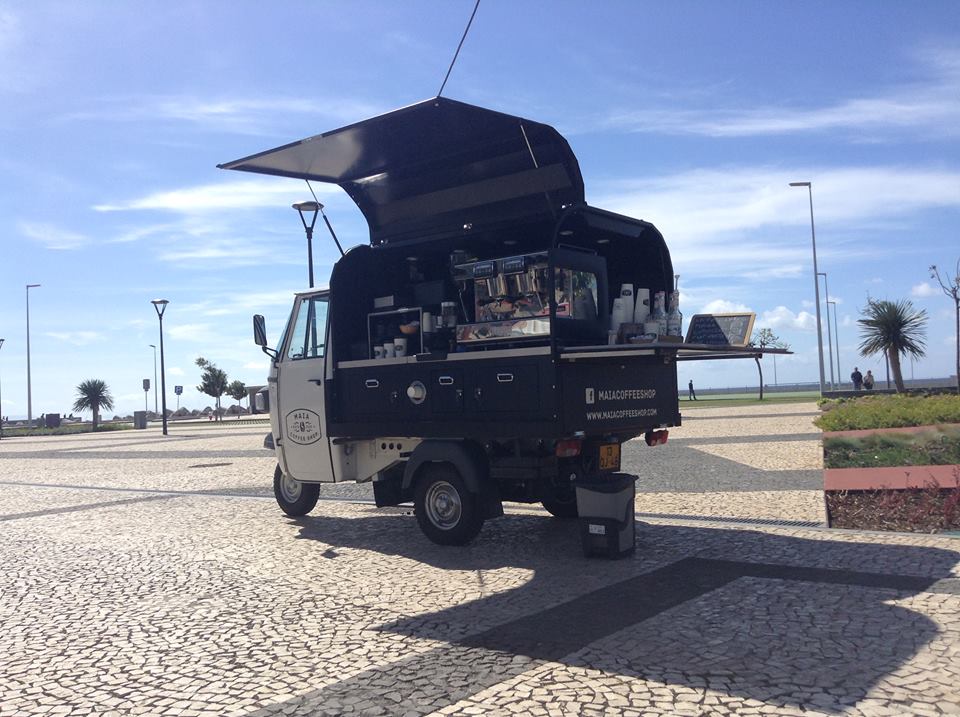 The 31-year-old studied in the UK, gaining the title of Barista Maestro at a training school run by one of the UK’s major coffee chains. He then spent six years honing his skills in the city before returning to home ground to launch his own business.

Ricardo says: “It was my dream have my own small coffee shop, so every single detail was created by me on a small piece of paper and passed to a company who built things like that.”

He says the truck, which measures around four metres squared, attracts a lot of attention from locals and tourists alike. He says: “They react with a lot of surprise, take a lot of pictures, and say it is the first time they have seen a coffee shop like that. Mostly they come to me because of the smell of the coffee. People who have never drunk coffee start to drink it, because of the quality, the taste, and the way it is presented.”

He says overall the reactions are very positive, with customers telling him it’s “an amazing idea, and clean, good coffee.”

But will the coffee truck take him everywhere he wants to go? Ricardo says that for the meantime he will focus on growing his brand and keeping customers happy – but admits he’d like to open his own ‘fixed’ coffee shop in the future.

Coffee trucks will come and go. But for me, Ricardo and Kirstin and others like them capture the wonderfully innovative spirit of today’s Coffee Universe; a generation of entrepreneurs buzzing with caffeine and enthusiasm and good ideas. They all have different methods but a single, simple goal – to make good coffee.

Wheels or no wheels, that’s good news for all of us.